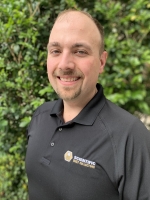 Brian Mathews is the Engineering Manager at Scientific Dust Collectors (SDC) located in Alsip, Illinois. He received a Bachelor's of Science in Mechanical Engineering from Dordt College in 2006. After college, he worked for two years as a QA Manager for an automotive supplier before being hired as a Project Engineer at SDC in 2008. As a Project Engineer he conducted extensive testing on baghouse cleaning systems and wrote several white papers including Advantages of Cleaning without a Venturi in Pulse Jet Baghouse Collectors. In 2011, Brian was promoted to his current position of Engineering Manager. He has designed and commissioned many dust collection systems that are in operation across the United States and internationally in Canada, Costa Rica, and Qatar. In 2014, he completed A Scientific Review of Dust Collection 2nd Edition; Scientific Dust Collector's manual on dust collection that provides additional information on system design, filter media, and explosive dust control. Currently he is working on the ASHRAE 199 Test Lab to further provide evidence of SDC superior patented cleaning technology. In addition to being a Dust super hero, faster than a supersonic air burst, more powerful than an induction of air into filter media; Brian enjoys spending time with his family and cheering for the Chicago Bears.